Our Lady of the Pearl 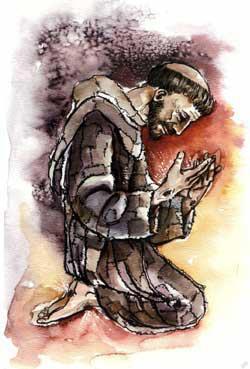 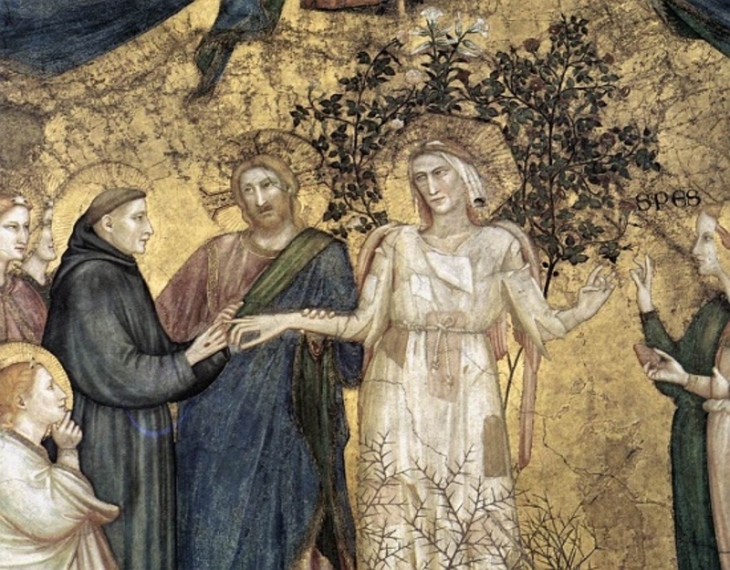 “Blessed are the poor in spirit, for theirs is the kingdom of heaven.”  Matthew 5:3.

“Now someone approached him and said, ‘Teacher, what good must I do to gain eternal life?’  He answered him, ‘Why do you ask me about the good?  There is only One who is good.  If you wish to enter into life, keep the commandments.’  He asked him, ‘Which ones?’  And Jesus replied,  ‘You shall not kill; you shall not commit adultery; you shall not steal; you shall not bear false witness; honor your father and your mother’; and ‘you shall love your neighbor as yourself.’  The young man said to him, ‘All of these I have observed.  What do I still lack?’  Jesus said to him, ‘If you wish to be perfect, go and sell what you have and give to the poor, and you will have treasure in heaven.  Then come, follow me.’  When the young man heard this statement, he went away sad, for he had many possessions.”  Matthew 19:16-22.

For Francis, Lady Poverty was symbolic of the poor Christ.  She was the symbol of the paradoxes of the Gospel, such as richness in poverty, life in death, strength in weakness, peace in temptation, fullness in emptiness and love in detachment and deprivation.  Lady Poverty made everything hard soft, and everything difficult easy.

For Francis, Lady Poverty also was a means to the indwelling of God and a way of life that makes present the kingdom of God here and now.  (“Blessed are the poor in spirit, for theirs is the kingdom of God.”)  God takes up his dwelling among us only when we are poor in spirit, emptied and detached from all that prevents Him from filling us with himself. Lady Poverty involves simple living, an attitude of love, thankfulness and giving and using our gifts as they were intended.  It brings freedom and true joy and, above all, requires humility.  It involves cleaning out the clutter of our hearts and surroundings to make room for God and surrendering to His holy will.

The way to Lady Poverty takes us through the Garden of Eden where we must slay the dragons of pride, pleasure and possessions, those same dragons encountered by our first parents and by Jesus in the desert and again in the other garden, the Garden of Gethsemane.  This is the struggle that Francis went through, especially during his early days.  There, in Eden or the desert or Gethsemane, like Francis, we learn that Christ alone is the fullness of life and our priority is to seek first the kingdom of God.  We repent and choose to follow the evangelical counsels of poverty, chastity and obedience.  We join Jesus on the cross and die to self.

Francis and His Father

Lady Poverty was a pearl of great price for which Francis gave up everything when he stripped himself of his clothes before his father and the bishop.  Earlier that day he had been begging in the streets.  The crowds were more abusive and louder than usual when Francis passed his father’s shop.  Bernardone was livid with shame and heartbreak.

Bernardone dragged Francis before the Bishop of Assisi, asking for the return of his money.  During this encounter and before all the people, Francis removed his clothes and placed them at the feet of his father.  He declared, “Until now I have called Peter di Bernardone my father.  Now I return his gold and the clothes I have received from him.  From now on I shall no longer say:  ‘My father, Peter di Bernardone,’ but ‘Our Father who art in heaven!’”

Many could not hold back their tears.  Even the bishop was emotional as he covered Francis with his own cloak.  Some castoff clothes of the gardener were found for him.

The rich young man in Matthew went away from Jesus sad.  His possessions were a barrier between himself and God.  He could not detach himself from those things that separated him from the Lord.  He could not surrender his heart nor deny himself.  No doubt Francis felt sadness too at the loss of his father, but he went away with the joy of  having bought a pearl of great price.  Francis went away poor, but he embraced Lady Poverty – he embraced the poor Christ – and became rich.  The kingdom of heaven was his.

“Whoever wishes to come after me must deny himself, take up his cross, and follow me.  For whoever wishes to save his life will lose it, but whoever loses his life for my sake will find it.”  Matthew 16:24.

The Rule of the Secular Franciscan Order, Article 11

Trusting in the Father, Christ chose for himself and his mother a poor and humble life, even though he valued created things attentively and lovingly.  Let the Secular Franciscans seek a proper spirit of detachment from temporal goods by simplifying their own material needs.  Let them be mindful that according to the gospel they are stewards of the goods received for the benefit of God’s children.

Thus, in the spirit of “the Beatitudes,” and as pilgrims and strangers on their way to the home of the Father, they should strive to purify their hearts from every tendency and yearning for possession and power.

(Sources:  The New American Bible; The Journey and the Dream by Murray Bodo; Saint Francis of Assisi by Leon Cristiani; The Way of St. Francis by Murray Bodo; The Rule of the Secular Franciscan Order.)