Our Lady of the Pearl

During the early days of his deeper conversion and call, St. Francis was praying in the abandoned chapel of San Damiano, before a Byzantine style crucifix.  He heard the voice of the Lord, speaking from the crucifix and saying, “Francis, go and rebuild my house which is falling into ruins.”  Francis, not realizing that Jesus meant the spiritual church but thinking that he meant the physical building, immediately began to repair the chapel.  He also repaired two other chapels.  The third one was popularly called the Portiuncula or the Little Portion, dedicated to Saint Mary of the Angels and now enclosed in the Basilica of Saint Mary of the Angels.

The friars came to live at the Portiuncula in early 1211, and it became the “motherhouse” of the Franciscans.  It was the place where Clare came to the friars to make her vows during the night following Palm Sunday in the year 1212.  She received her habit before the altar of Our Lady, and Francis cut her hair.  The Order of the Poor Ladies was born (later it would be called the Order of Poor Clares and the Franciscan Second Order).  Henceforth Clare called herself “the unworthy servant of Christ and the little plant of Blessed Father Francis.”  Finally, the Portiuncula was the place where Sister Death came to reunite Francis with God on October 3, 1226. 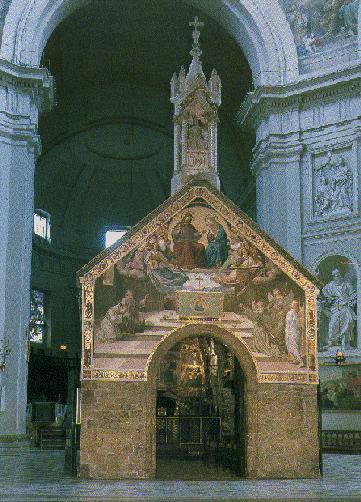 The way Francis and his friars came to live at the Portiuncula happened in this way.  They were staying at Rivo-Torto, and one day when the friars were in their poor abandoned hut, each praying and meditating in his own place, a peasant suddenly and unceremoniously barged into their midst, bringing in his donkey.  He shouted, “Come on in, my donkey, we can settle down comfortably here.”  Anyone else might have been angry, but Francis merely looked at the peasant a moment and then realized that he intended to transform this refuge of prayer into a stable.  Francis stood up and said to his followers, “It is certainly true, my brothers, that God has not called us to maintain an inn for donkeys, but to pray and show other men the path to salvation.” The friars understood what he meant, and they all stood up and left immediately, setting out for the Portiuncula.  At that time it belonged to the Benedictines, but the abbot gave the friars permission to use it.  They paid a modest rent each year of a basket of fish to the monks who, in return, gave the friars a flask of oil.

St. Francis desired so greatly that the friars receive the same evangelical spirit as himself that long after the foundation of the order, he continued to exhort them in this manner:  “See to it, my sons,” he would say emphatically of the Portiuncula, “that you never abandon this place.  If you are driven out from one side, go back in at the other.  For this place is truly holy and is the dwelling place of God.  Here, when we were but few, the Most High gave us increase; here He enlightened the hearts of His poor ones by the light of His wisdom; here He set wills afire with the fire of His love.  Here he who prays with a devout heart will obtain what he prays for and he who offends will be punished more severely.  Wherefore, my sons, consider this dwelling place of God to be worthy of all honor, and with all your heart, with the voice of joy and praise, give glory to God in this place.”  (II Cel 19)

Interior of the Portiuncula